When I think about a Disney icon, only one person really comes to the forefront of my mind every single time – Walt Disney. To have the opportunity to walk where Walt walked, talk where Walt talked, and just be in the space where the creative magic happened – priceless!

That is exactly what I was able to do last week as I had the opportunity to tour Walt Disney’s Woking Way home in Los Feliz. Granted, some of the home does look slightly different than it did back then, but honestly, most of it is exactly the same!

Here is Walt Disney standing in front back when he lived at the Woking Way residence. 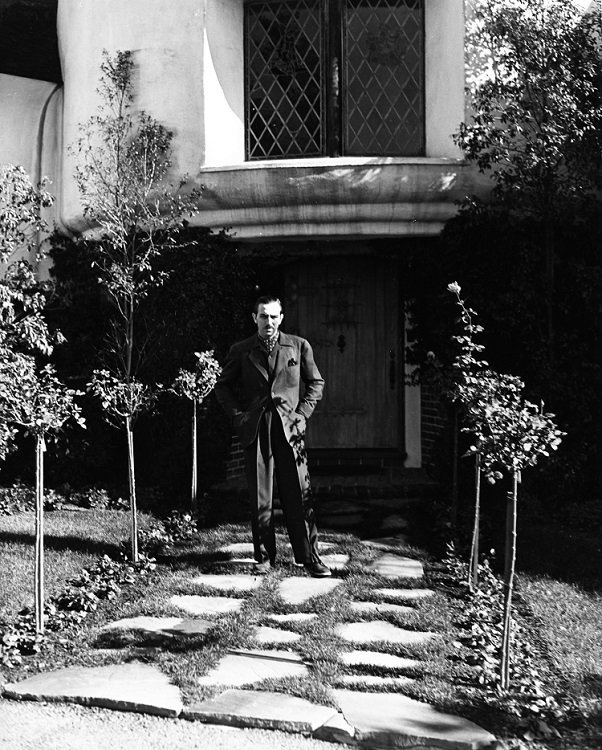 Here is what the front entry currently looks like. 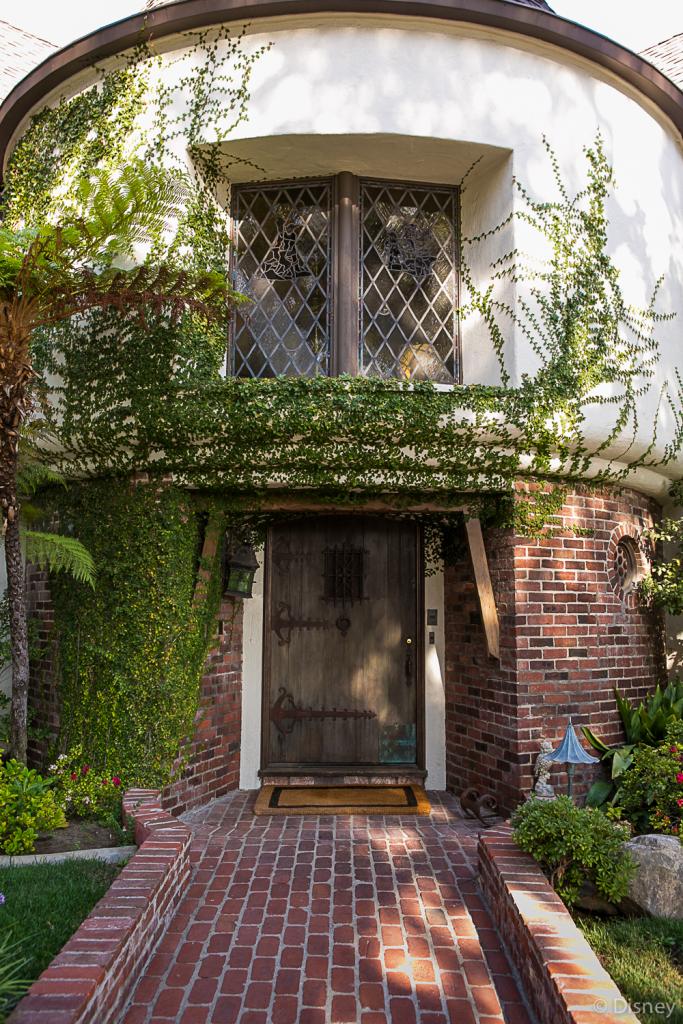 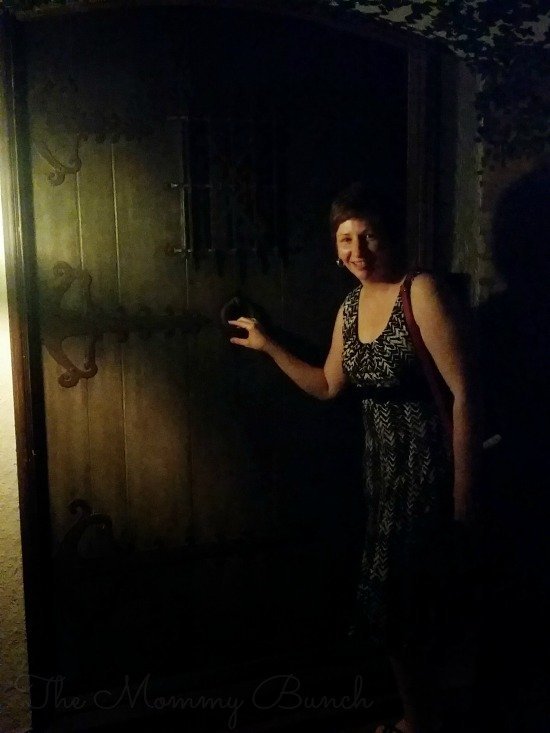 So you might be asking…. why did we tour this home? Does Walt’s family still own the home?

Walt’s family no longer owns the residence and it is in fact currently owned by Russian filmmaker, Timur Bekmambetov, who was so gracious to open up the doors to the home and allow us a peek inside in celebration of the releases of both Sleeping Beauty Diamond Edition (Oct 7) and Maleficent (Nov 4). It is important to note that the home is not furnished as it was when the Disney family lived there, but the owners have made a concerted effort to give the feel of the 1930s.

Built in the summer of 1932, Walt looked back to his own French/Norman roots and came up with a design that incorporated architectural elements from Medieval France, the Mediterranean and Tudor England, creating his own unique combination of architectural styles. The finished house has a delightful and welcoming fairy tale look, perfect for raising a family – which is exactly what he and his wife did – and which features many design elements recognizable in Sleeping Beauty.

When you first approach the home you immediately get the sense that this home was built with a delightful and welcoming fairy tale look. This is exactly what Walt and his wife wanted for raising a family. 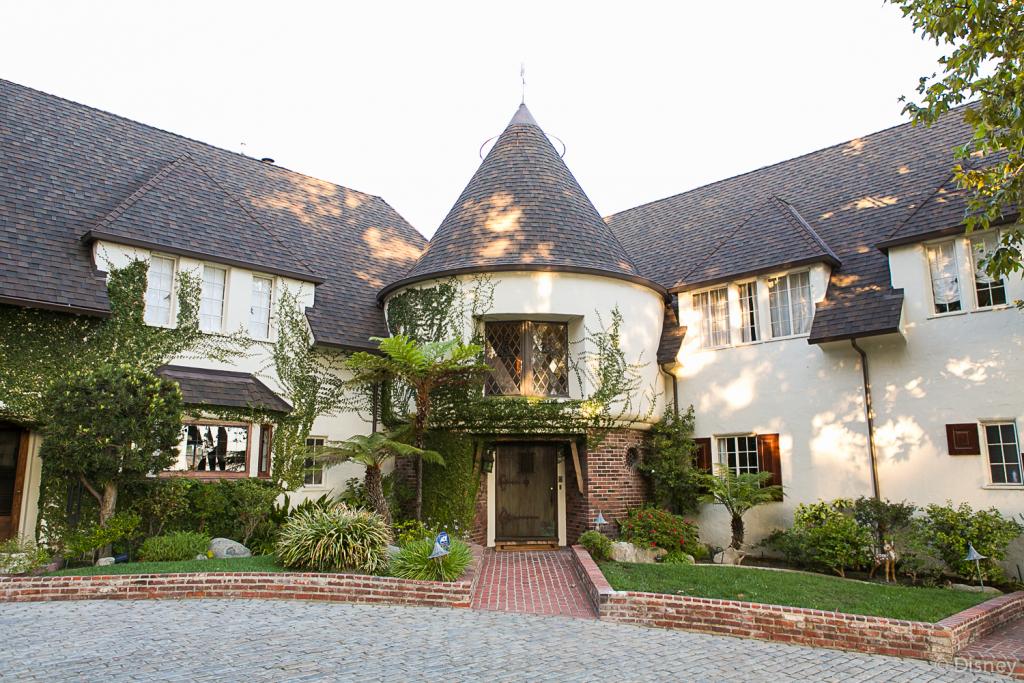 FOYER: As you enter through the front door, you are catapulted back into the glamour of this 1930’s era home with the beautiful winding staircase and hand-painted ceiling fit for a princess (or prince) to make a grand entrance! 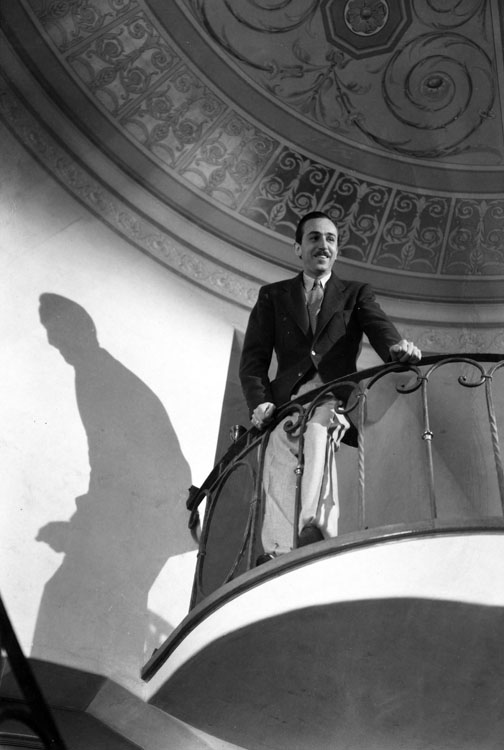 Inside this circular rotunda, note the classic winding staircase made of plaster and wood. During his residency, Disney had much of the wood flooring carpeted. Also, look up to see the intricately painted ceiling mural!

Fun Fact! Among the assorted Depression-era workers hired to help build the house in 1932 was a young graduate of the Vienna Academy of Fine Arts, whom Walt had paint the whole ceiling. 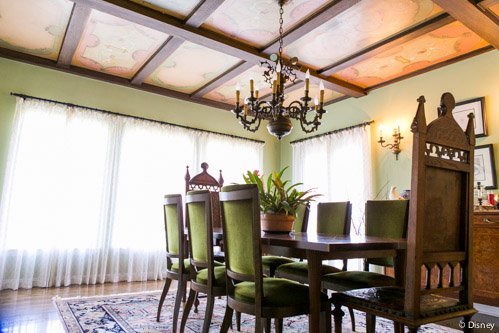 Fun Fact! A man of simple pleasures, Walt’s favorite meal was canned beans, which was likely served at this table! 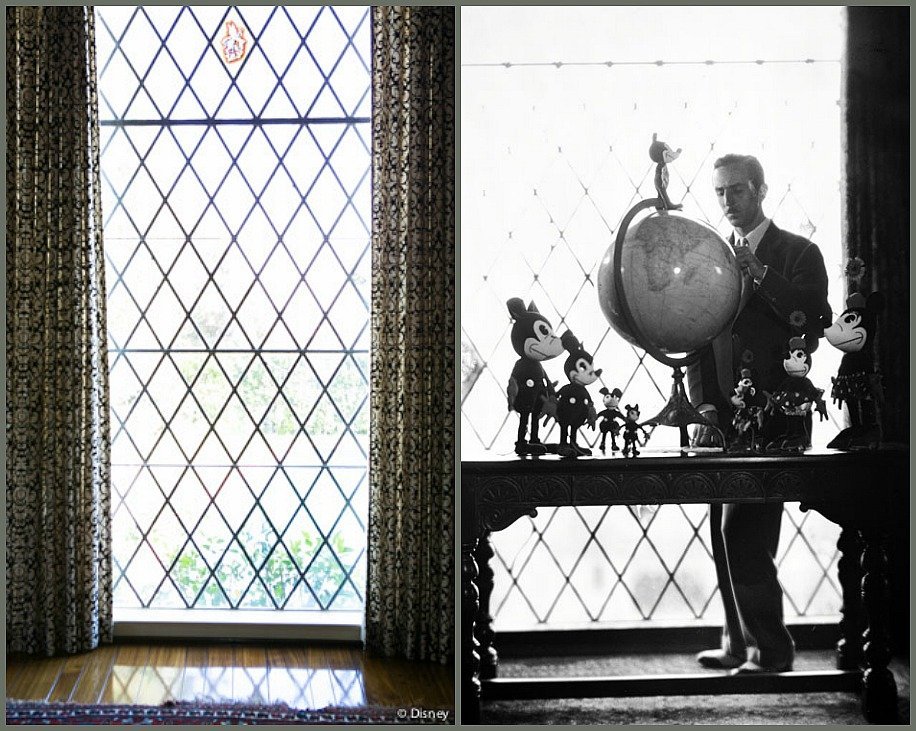 Fun Fact! Diane Disney named the Juliet balcony “Christmas Tree Point.” On Christmas morning, she and sister Sharon would peer out from here to get their first glimpse of the decorated tree and presents below. 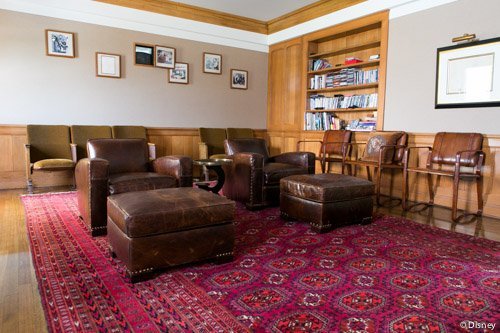 Here the family gathered for private screenings of the great films of the day, including Gone with the Wind, and previewed dailies of current Disney films in production, which likely included Snow White and the Seven Dwarfs (1937), Pinocchio (1940), Fantasia (1940), Dumbo (1941) and Bambi (1942). Note the original art on the walls, including a drawing of Maleficent! 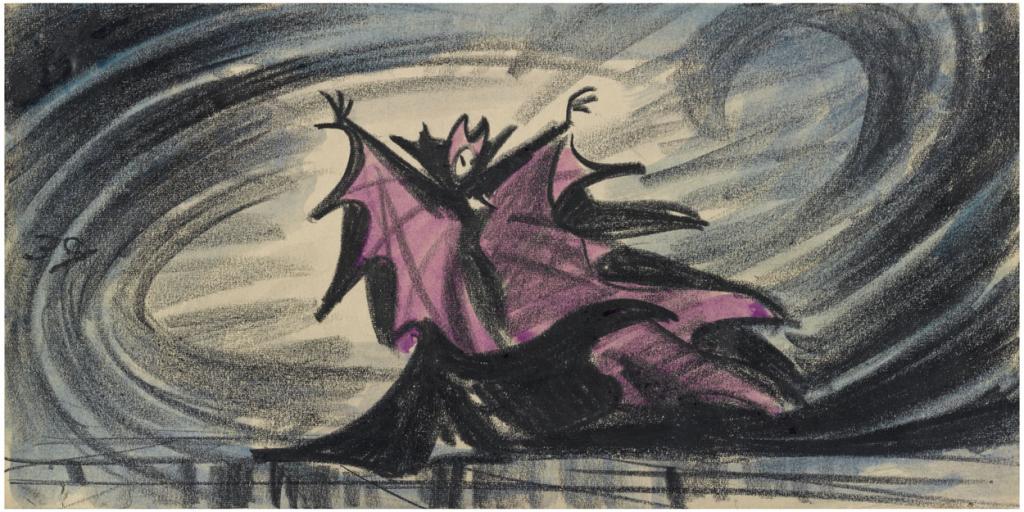 Upstairs: After spending some time checking out the main floor, we then headed upstairs to see the girls’ bedrooms, as well as the gymnasium/playroom.

Diane’s Bedroom: The larger of the two children’s bedrooms, with walls recently painted in vintage Sherwin-Williams colors. Diane owned a ragged Winne the Pooh doll, which she hugged every night when she went to bed. 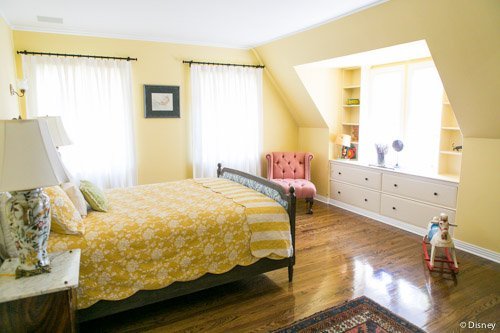 Gymnasium/Sleeping Porch: Labeled a “studio” on the original plans, this room served as Walt’s exercise room and originally held his polo trophies and photos of his polo ponies. It was later converted into the girls’ playroom. Adjacent to the gym was a screened-in sleeping porch. 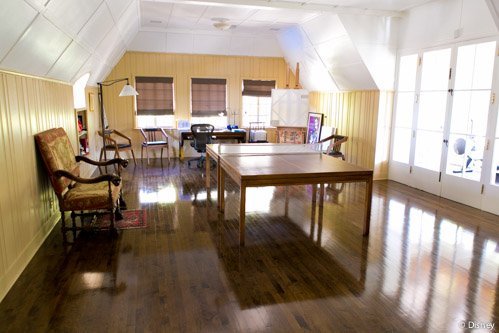 It was in this room that we got a nice suprise and were able to view the EXACT costumes worn by Angelina Jolie and Elle Fanning during the making of Maleficent! 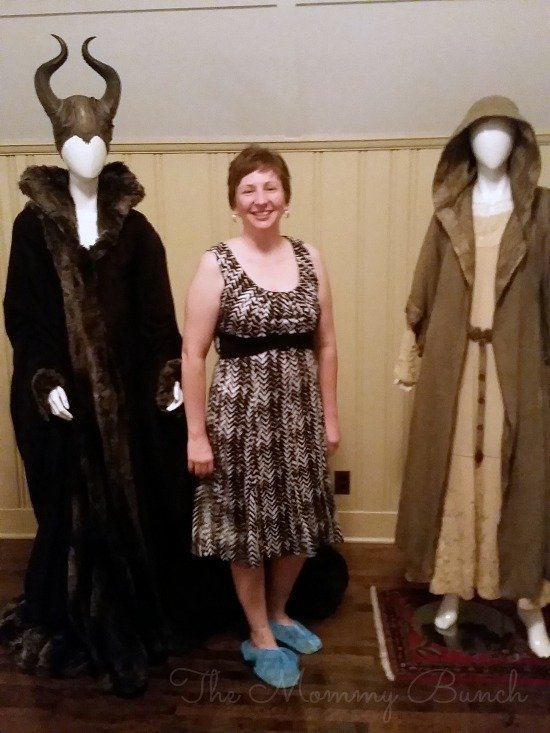 Outside: The last stop was a trip outside where we found a beautiful little playhouse – fit for two little princesses!

THE SNOW WHITE PLAYHOUSE: Still intact, the Snow White and the Seven Dwarfs-style playhouse was a Christmas gift from “Santa” to Diane and Sharon and was designed to match the house. It originally included a sink, kitchen, table and chairs. The original corner shelf for play dishes still exists inside.

Fun Fact! When first built, the Playhouse included a working phone, on which the girls received a call from “Santa” asking how they liked it!

Life at 4053 Woking Way was filled with childlike play, inspired as much by Walt’s daughters’ imaginations as by his own. According to his late daughter Diane, Walt would chase the girls around the house, cackling like the wicked witch in Snow White, or twirl them endlessly by their heels. Walt and his family lived at the Woking Way residence until May 1950, when they moved to a new home in Holmby Hills.

I hope you enjoyed your tour of Walt Disney’s former home.

Don’t forget to check out the new release of Sleeping Beauty on October 7th – many of the design elements from this home are recognizable in the film! 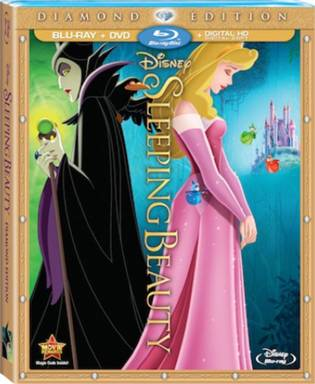 [Tweet “Ever wanted to look inside Walt Disney’s home? Now’s your chance! #DisneyInHomeEvent”] 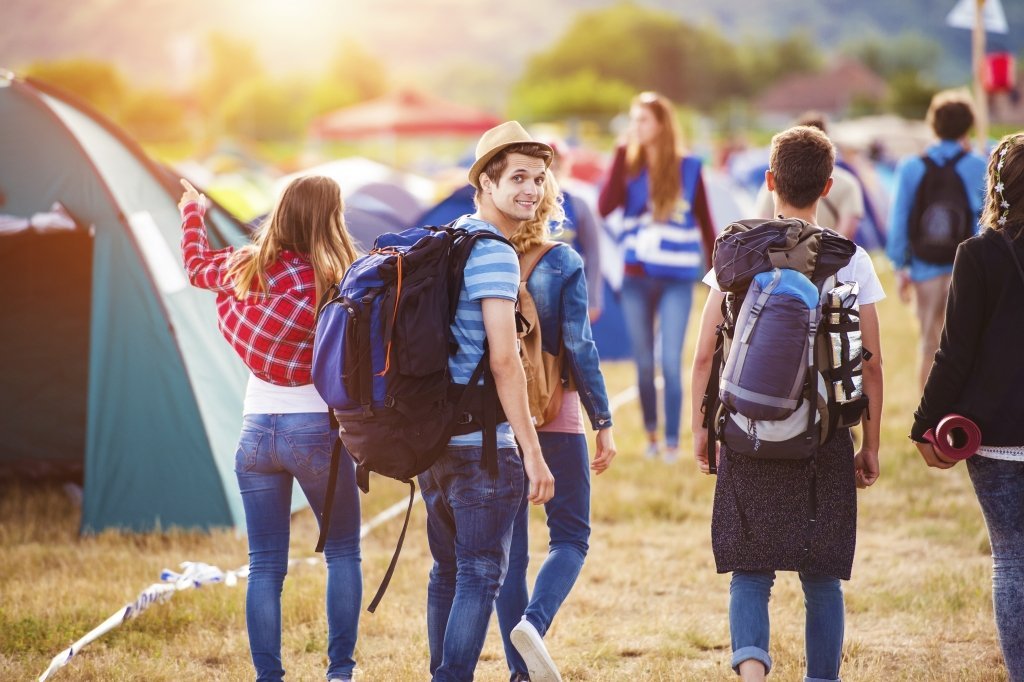 Maximize Your Festgoer Experience With 8 Of The Best Festival Apps 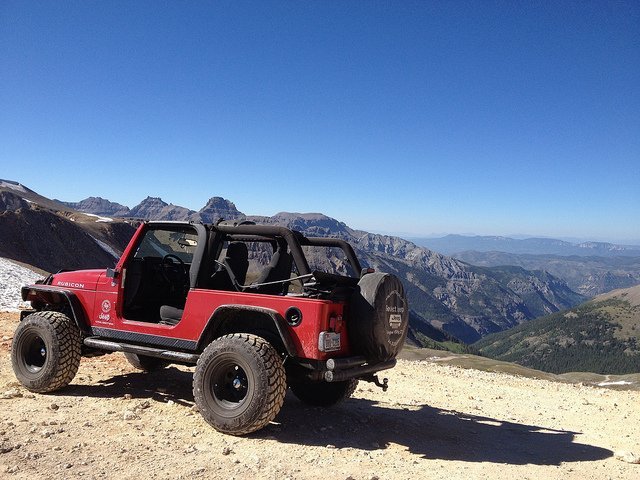