Have you ever wondered what happens to all the artwork, images, and models that are used in the production of a film? Before visiting the Disney Animation Research Library (in a top-secret location), I guess I never really thought about it. I didn’t realize how much work actually went into the production of an animated film, let alone all of the artwork and memorabilia there may be associated with each film once it is completed.

Having a chance to actually tour the Animation Research Library really gave me a new perspective and appreciation for everything that goes into the making of an animated film. While visiting L.A. for the #DisneyPlanesPremiere and the #LittleMermaidEvent, our group was lucky enough to not only get a glimpse into what is stored in the Animation Research Library, but also talk to a few of the people directly involved with restoring some of the older artifacts.

The location of the Animation Research Library is so secret that they blindfolded us all and made us sing It’s A Small World as we drove over there. Okay, not really 🙂 …but it is a top-secret location and we were not allowed to tell anyone where we were or take any photographs other than in the Lobby. Any photos that were taken while visiting were taken by Disney staff and approved for use prior to publication.

The first stop on our tour was the Image Capture room where they work on digitizing some of the artwork from previous animation projects. Disney employees use several different types of cameras to capture the artwork in a digital format. One of their cameras takes pictures up to 240 megapixels. If you compare that to a standard iPhone that is only 5 megapixels you know they are getting great images.

Once the images are digitized you can actually see the ‘animation’ sequence right on the computer; and whether it is in a rough form or nearing the final product it is all captured. 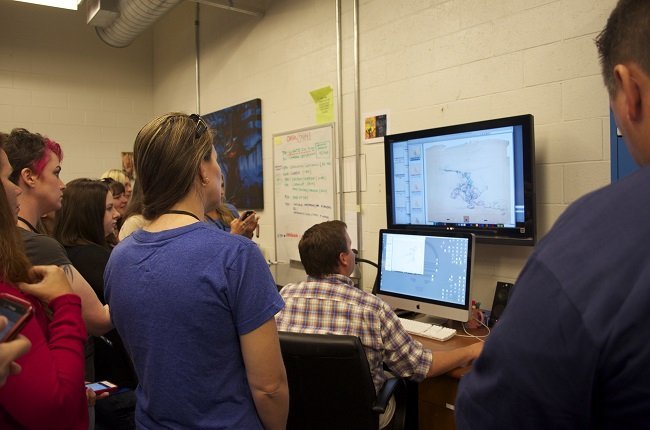 The next stop on our tour was the design department. We were told this is the only place in the Animation Research building that was allowed to be messy. Here they work on creating displays for parks, book projects, and designing any type of art exhibits for Disney. There were so many cool things to look at it was quite unbelievable. 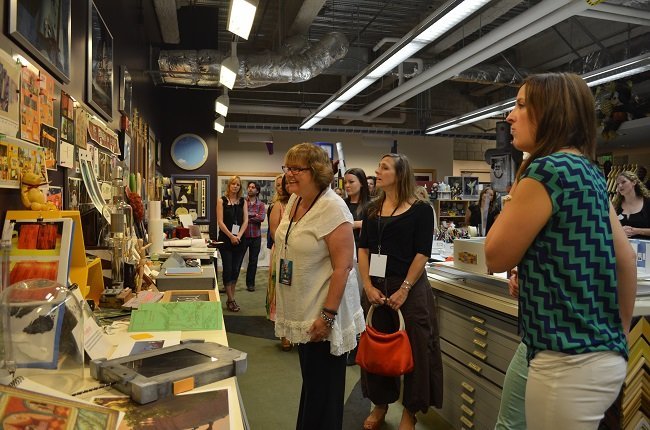 The artists that work in this department also helped build the exhibit called ‘Dreams Come True’ which was featured in the New Orleans Museum of Art, (NOMA Exhibit) shortly after Hurricane Katrina. There was an amazing scale model of the actual exhibit that was really neat to see in person. You can see it just on the end of the table in this picture, right next to me on the very left! 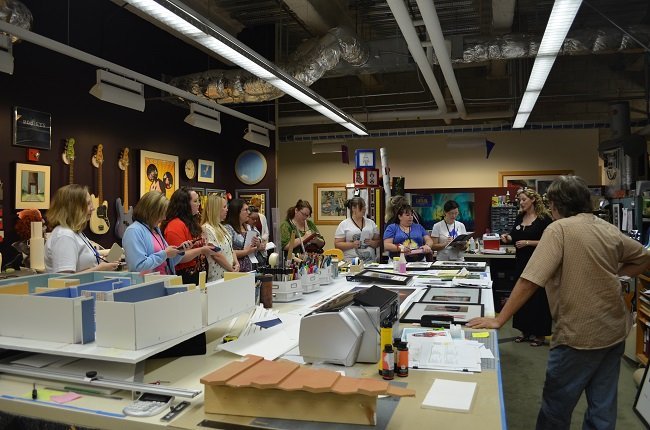 One fun thing about visiting this department was hearing about the guitars they had all over. Many of the employees actually play and collect guitars, so they bring them to work with them and occasionally play a little song. You can see several of the guitars around the room in this photo as we are listening to our guide tell us about the work they do. 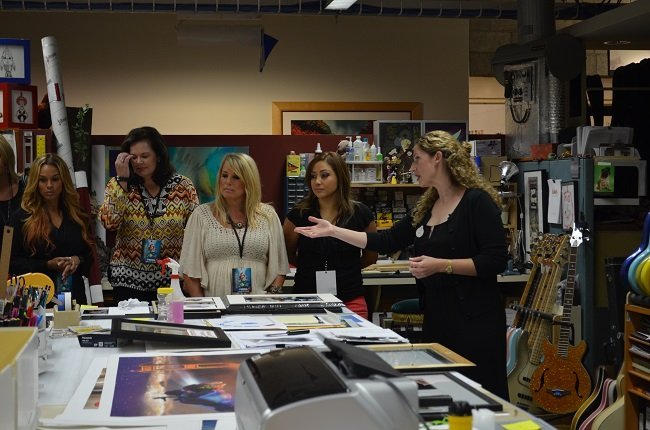 Next on our tour was a visit to the temperature controlled, locked vaults. We got to see a total of two vaults, but there were many more located in the building (I believe 11 total). Can you believe there really are Disney Vaults!

The vaults store tons of pieces of animation, scale models, and loads of other artifacts, but one of the coolest pieces that we got to see was a glass pane that was used in the animation process while making Bambi! 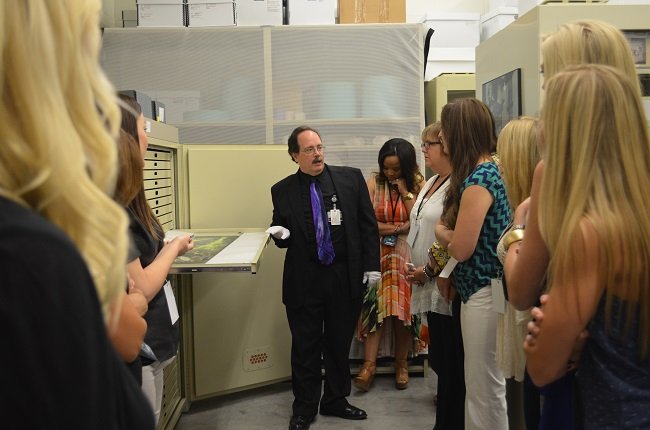 Here you can just see the tip of a scale model from Disney’s Pinocchio – Monstro the whale! You can also see us peeking in to take a look at all the cool stuff on the shelves….there I am right in the middle! 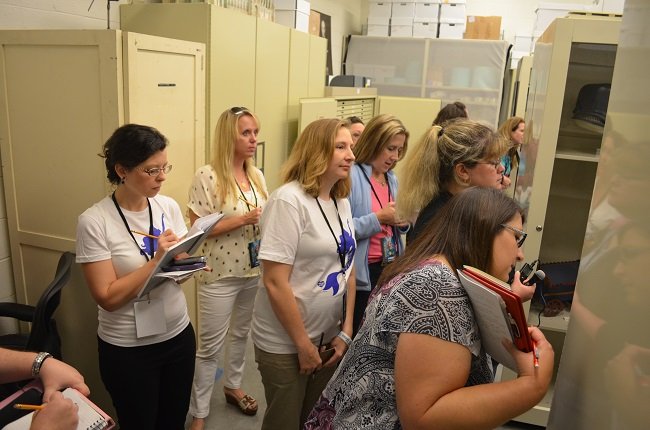 After touring the image capture room, the design room, and the vaults, we had a chance to meet with Leila Smith, the creative director for The Little Mermaid. During this meet and greet we had the opportunity to view a few pieces of original concept artwork from the making of The Little Mermaid.

Learning about the process and progression of the film was one of the highlights of the trip for me. One of my favorite little tidbits was learning that Ariel originally started out as a blonde! Can you imagine seeing a blonde Ariel swimming around? I know I can’t, so it was so weird to see her drawn that way. 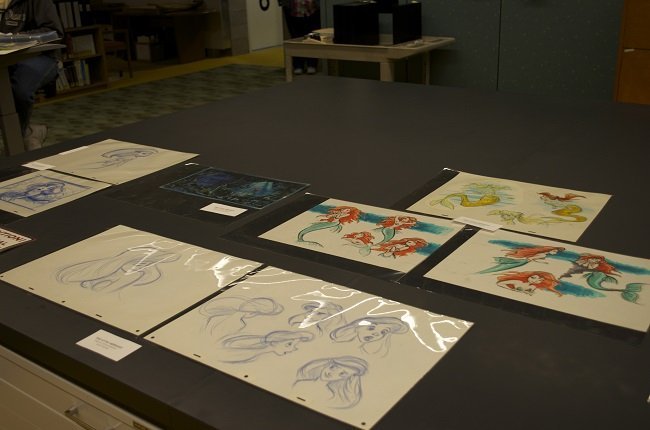 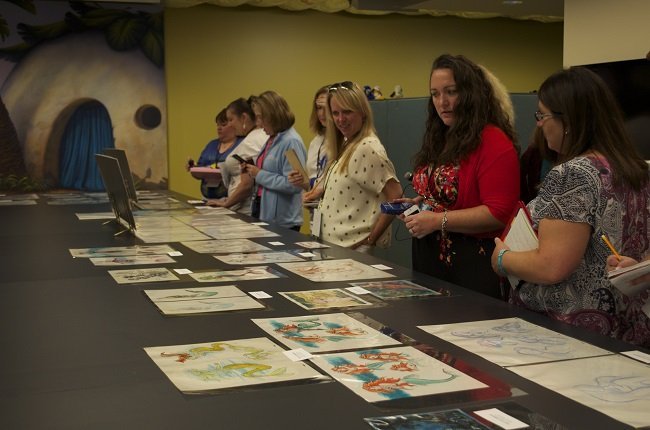 We were also told that Ursula’s transformation from early concept to finished stage was one of the hardest to complete. She started out much scarier than she appears in the final product, and was actually a mermaid herself, with claw-like nails and a sunken in face. She was eventually deemed too scary and became what you now see in the film. 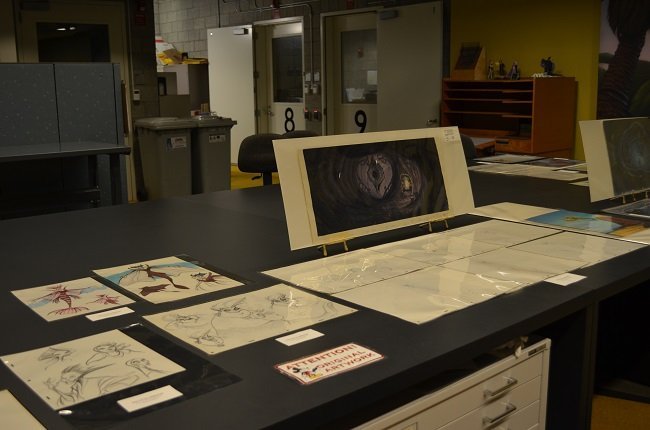 Viewing all of this amazing artwork, and learning about all the processes a film goes through before it reaches the final stage was really an amazing experience for me. I have a whole new appreciation for animated films, and the level of dedication and hard work that goes into making a feature length film. Of course, I’ve always been a huge Disney fan, but seeing how passionate everyone was about what they do really made it that much better!

Be sure to order your copy of The Little Mermaid

I received an all expenses paid trip to from Disney to Los Angeles, CA to attend the Planes Red Carpet Premiere, attend an event for The Little Mermaid diamond edition DVD release, and to meet Disney’s Super Buddies. All opinions expressed are my own. 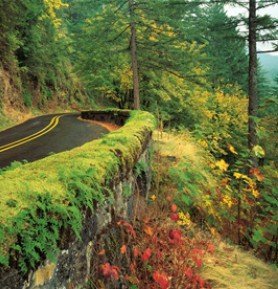 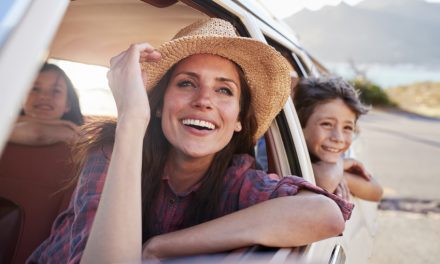