On our recent trip to visit Pixar Studios and learn about the upcoming film, Inside Out, I had a chance to sit down with Patrick Lin, Layout Supervisor for the film. 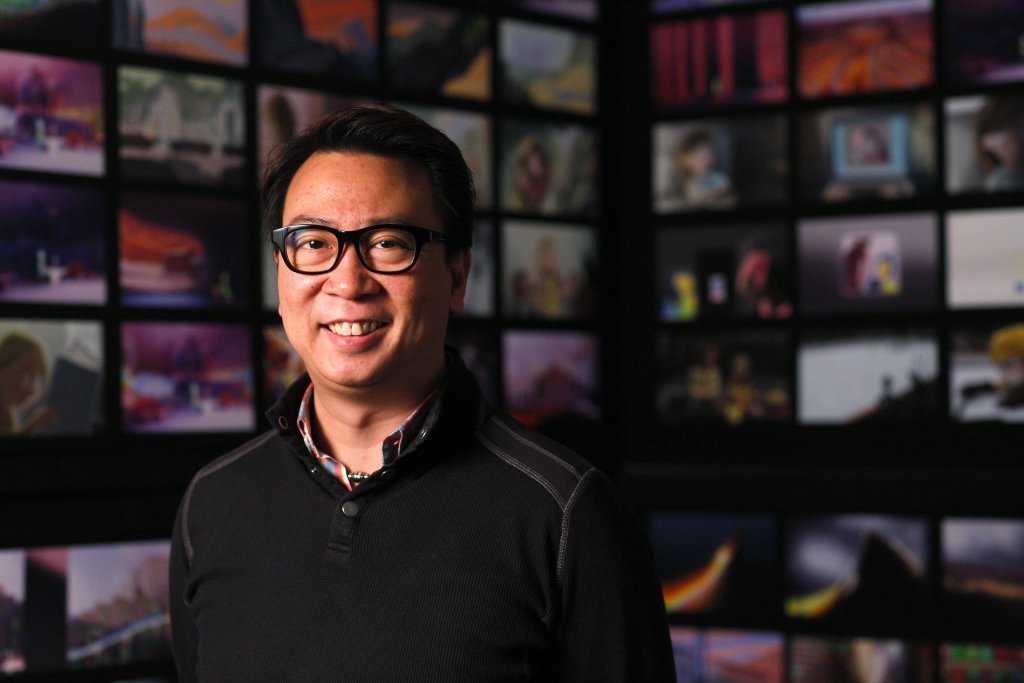 INSIDE OUT Director of Photography–Camera Patrick Lin. Photo by Debby Coleman. ©2015 Disney•Pixar. All Rights Reserved.

Lin’s department is at the front of the production pipeline. They set up the foundation for all the other departments to build their work on, and are the first step in exploring what the film could look like cinematically. Lin talked a lot about something called ‘virtual cameras’. 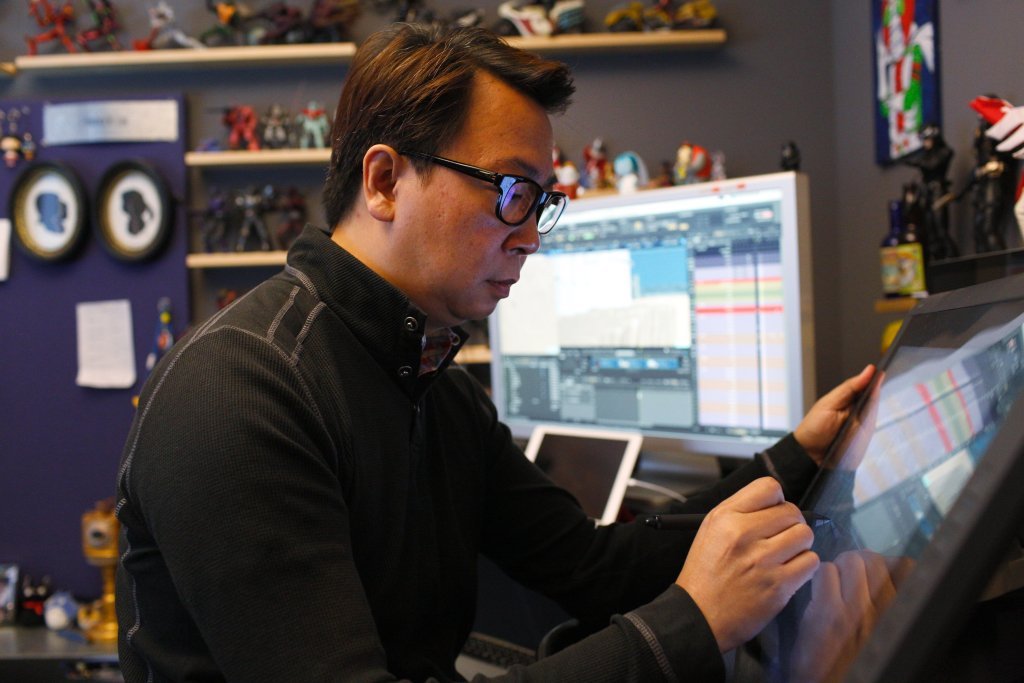 INSIDE OUT Director of Photography–Camera Patrick Lin. Photo by Debby Coleman. ©2015 Disney•Pixar. All Rights Reserved.

It was quite difficult for me to wrap my head around how a virtual camera as it is something that seems a bit abstract to me. After listening to Lin for a bit though, I started to understand a little better as he shared how the computer animation process works.  ‘In live action, you hear, lights, camera, action. That’s the basic process. In computer animation world, it’s camera, action, lights.’

It may still be hard to understand that you aren’t just drawing pictures in these films, you have an actual camera (virtually) that has to capture where everyone and everything is going to be in the shot, but after listening to the explanations is was easier to understand.

He mentioned that the virtual cameras have all the pieces a real camera has, like lenses to choose from, focus, lens distortion, and depth of field. The virtual camera mimics the movements of a real camera. I wish I could show you a video of our interview because it’s so much easier to understand when you have someone demonstrating!

Once the story is in place and the scenes have been shot, that is when everything goes over to the lighting department. We met with Angelique Reisch, who was able to spend some time explaining how this all works. This is another thing that I had no idea took place in computer animation. It is just amazing to see all the steps that go into making a movie like this! 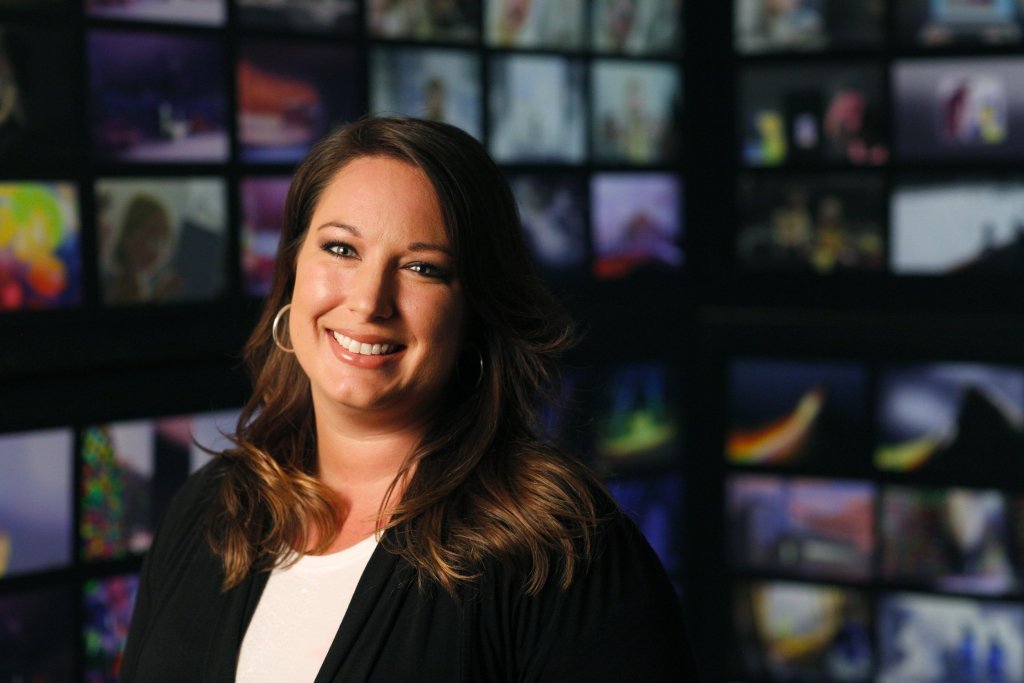 She showed us several scenes before they were ‘lit’, and then showed us the afters. It is truly amazing how much of a difference just adding in the correct lighting makes in a scene! Just take a look at the picture below and you can see a before of Joy on the right and an after on the left. 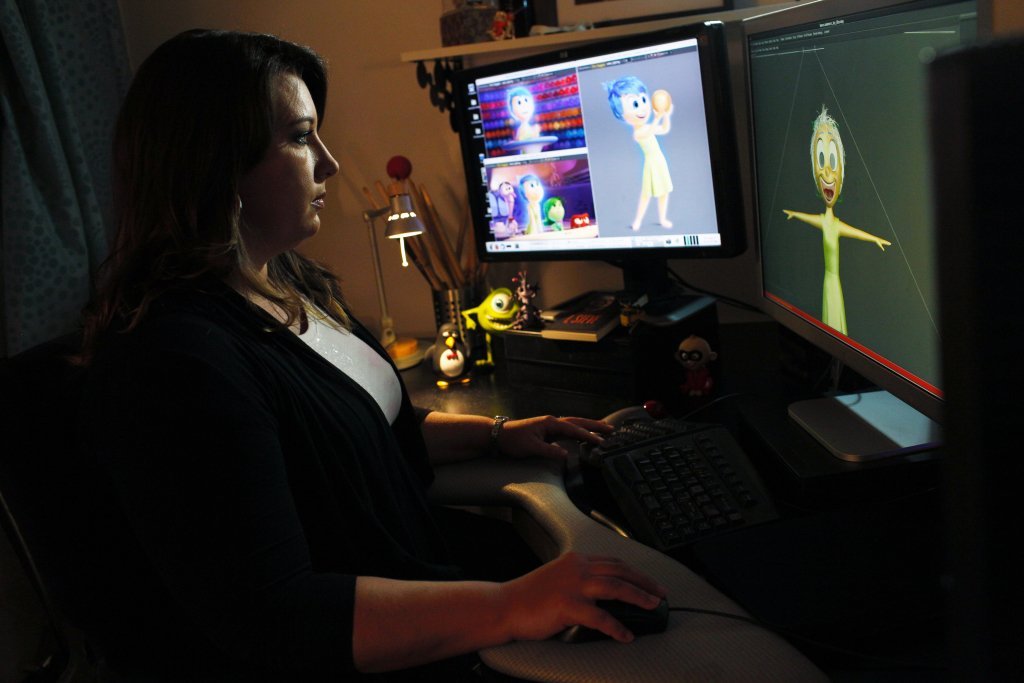 When working on lighting for a film, there are Principals of Lighting that ensure lighters are both supporting the story, and creating the most visually appealing images they possibly can.

1) Directing the Viewers Eye: Shots are on screen very briefly so lighting is used to draw the eye to the intended story point.

2) Creating Depth: Good value contrast, good lights and darks, with strong foreground and back ground elements, should direct your eyes to the focal point of the shot.

3) Enhancing Mood, Atmosphere, and Drama: This enhances the emotional experience of the viewer through light intensities, colors, and values. They light a moody contrasty scene with more of a dark tone and light a really bright cheerful scene if it’s a more comedic moment.

4) Conveying Time of Day: Morning light is typically cheerful and optimistic, sun is lower in the sky and shadows are longer. Noon lighting is not typically the most aesthetically pleasing because of sharp harsh shadows, and the image tends to be flatter because of fill light bouncing around. Sunset lighting shadows are much longer and light color is a bit more red, contrast increases and light is more directional with denser shadows.

5) Revealing Character Personality and Situation: Careful lighting can really push the emotion you feel in a scene.

Inside Out Sneak Peek!

More about Inside Out

Inside Out premieres June 19th, be sure to check it out!!

The Fault in Our Stars – a must watch!