Disney provided me with an all expenses paid trip to Los Angeles to attend the red carpet premiere of Planes and to attend a special meet and greet with Cooper from Super Buddies. All thoughts and opinions are 100% my own.

Many of you know that recently I had the chance to attend a Disney press event. During this event we had the chance to preview movies, check out some merchandise, and even meet a few stars. One of the cutest stars I had a chance to meet was one of the pups from the Disney movie, Super Buddies! 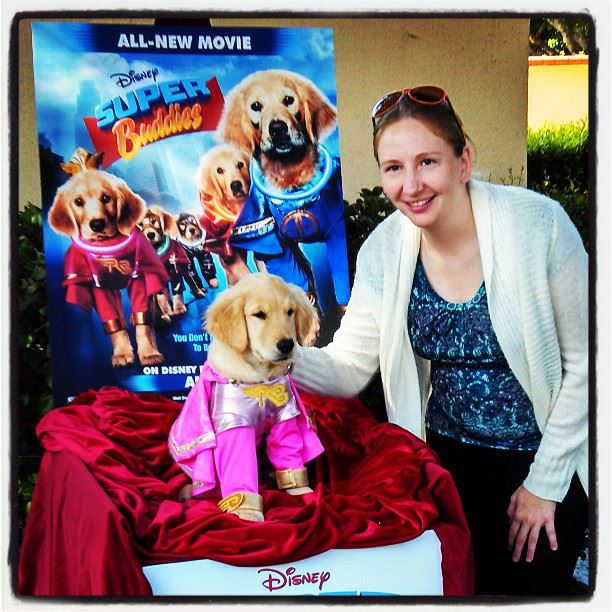 Personally, I am not a huge pet lover (even super hero dogs), but I’ve had several people tell me they would love to have one of the Super Buddies as a pet. My husband even said that if we could get one of the Super Buddies to take home as a pet then we could have a dog…I’m still not so sure about this.  🙂  Although it would be fun to have a super hero pet, I believe all of these particular dogs are spoken for….aww, too bad (with only a hint of sarcasm).

While I was there though, I did learn that the puppies are brought in for a two week “buddy boot camp” training starting at eight weeks old. They train for the two weeks, are on set for four weeks, and by 14 weeks they are already too big so they “retire” and are sent to great homes to live. This particular puppy, named Cooper (yep – a boy, all the lightest colored dogs always play Rosebud), was being adopted by the director.

Another thing I learned is that they go through about 20-30 dogs per movie by the time the entire film is finished. Because of the training and filming time they have to use 2-3 litters of puppies to shoot the entire movie. It is amazing how much training they put into each dog to only have them for such a short period of time! 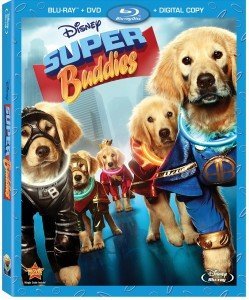 Once I got home my family and I were sent a copy of the movie to review. Super Buddies actually releases on Blu-ray combo pack August 27th, but we had a chance to watch it this last weekend. I can honestly say I’ve never seen both of my kids sit down to a non-animated movie and watch the entire thing from start to finish. They just loved this movie!  The kids were laughing through the whole thing, and after it was over they each told me their favorite parts.

My son really loved the whole thing, but kept telling me all about the policeman that turned into an alien…he just loved that!

Here is a fun little clip of when the chickens chase B-Dawg…check it out!

Who in your family is most excited to see Super Buddies?  Who is your favorite character?